William (Bill) P. Love was born in Tallahassee Florida, where Florida State University (FSU) is located. Florida State University School is a K-12 charter school sponsored by Florida State University. Bill attended Kindergarten there and thus began his long association with FSU. Bill continued through the twelfth grade at FSU School. After graduation from the high school, he enrolled in FSU and completed a B.S. in Physics in 1961. His goal was to work in the space program, and following graduation he obtained a position with NASA at Langley Research Center in Virginia. He found, however, the work less interesting that he had anticipated, and decided that he would much rather teach physics. He returned to FSU and received a M.S. in Science Education in 1962. He then taught for three years at Gibbs College in Saint Petersburg Florida (now called St. Petersburg/Gibbs College following a merger in 1965). After teaching Calculus at Gibbs, he decided that he liked mathematics better than Physics, and he returned again to FSU and received Ph.D. in Mathematics Education. After receiving his Ph.D., Bill accepted a position as instructor in mathematics at New College, Sarasota, Florida, but that appointment lasted only one year. He went to the AMS winter meeting in 1969 to look for another position and met Gene Posey, who was the head of the UNCG Mathematics Department and was there scouting for new faculty for the recently established UNC-Greensboro. It appeared that what Posey really wanted was a statistics instructor, so Bill did not try to meet with Posey. It turned out, however, that Posey also need someone in Math Education; so eventually Bill and Posey got together and Bill came to UNCG in 1970 as Assistant Professor in the Mathematics Department. He remained in the department until his retirement in 2001. Going from Kindergarten to Ph.D., all at FSU, may be some kind of record.

At UNCG Bill was in charge of the mathematics preparation of secondary and middle school math teachers. This job included not only advising, and teaching, but also observations of student teachers in their field experience. He taught such courses as “Math for Elementary School Teachers,” “Geometry and Algebra for High School Teachers,” “History of Mathematics,” “Calculus for Middle School Teachers” and “Abstract Algebra for Middle School Teachers.” He incorporated graphing calculators, TI-82 and TI-83, into some of his courses, and wrote a student workbook on the use of graphing calculators with instructions and activities and taught several workshops of these materials. He also developed and wrote the book for a course he developed called “Calculus and Computing,” a two semester course in the early days of computing when only IBM punch cards were used to input computer data and commands. Of course, like math faculty everywhere, Bill taught Precalculus and Calculus I, II, and III. Bill also served as the mathematical representative on a number of doctoral committees for students seeking a Doctorate of Education in the UNCG School of Education.

In retirement, Bill has developed a keen interest in carnivorous plants. He grows several different kinds and is an active member of the International Carnivorous Plant Society. He also keeps a few chickens and honeybees and tends an extensive vegetable garden. In addition to all this, Bill continues his interest in mathematics. For instance he has continued to extend his quick method for finding the area of any arbitrary closed polyhedral by entering the coordinates of the vertices of the polyhedral into a matrix form and preforming what he calls the “criss-cross” operation. 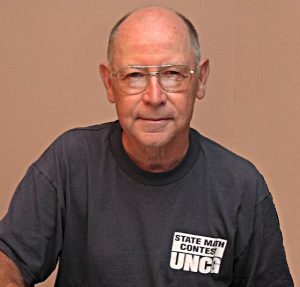