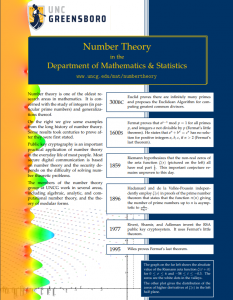 Number theory is one of the oldest research areas in pure mathematics. It is concerned with the study of integers (in particular prime numbers) and generalizations thereof. In the last 30 years number theory has found many applications, especially in cryptography. The members of the number theory group at UNCG work in several areas of number theory, including algebraic, analytic, and computational number theory and modular forms.

Algebraic numbers were first studied in a systematic way by Gauss and Kummer in order to formulate and prove the laws of higher reciprocity in number theory. The study of algebraic number theory for its own sake, and for its connections to such areas as algebraic geometry and cryptography, forms a vast domain of current research.

Analytic Number Theory is a branch of number theory that employs methods and techniques from Complex Analysis in order to solve problems concerning arithmetic properties of integers and the distribution of prime numbers. Originating in the work of Euler, Dirichlet, and Riemann, today its main topics of interest are usually divided into the Multiplicative, Additive, and Probabilistic branches. The Prime Number Theorem (1896) is it’s central result, while the Goldbach Conjecture (1742) and the Riemann Hypothesis (1859) are its most famous open problems.

This area of number theory deals with developing algorithms for explicit computation of the objects under consideration and the implementation of these algorithms. Using these methods, abstract objects are better understood and many new examples can be found. These can then be used to further develop the theory.

Modular forms are special functions that satisfy many internal symmetries associated to a group of isometries of the hyperbolic plane. The theory of modular forms was first developed in connection with the theory of elliptic functions in the first part of the 19th century. They show up in many different areas of mathematics, revealing connections that are still not well understood.