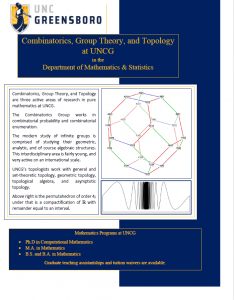 Combinatorics, or discrete mathematics, studies mathematical objects whose constituents are discrete, i.e. finite or at least separated, as opposed to continuous objects. It is a vibrant field that has major interactions with algebra, analysis, and probability. In fact, combinatorics has substantive connections with almost every field in mathematics. There are many, many interconnected topics of research within combinatorics, but graphs, hypergraphs, partially ordered sets, probabilistic combinatorics, algebraic combinatorics, enumeration, and combinatorial geometry are some of the major areas. 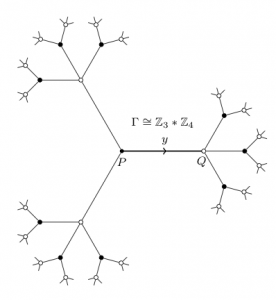 A group is the collection of symmetries of an object. In the study of group theory, there is an information exchange between a group and the object on which the group acts. A modern approach comes from considering the object to be the group itself, but as either a geometric or a measure-theoretic object. The result is an interchange between the algebraic information of a group and its geometric and measure-theoretic counterparts. The class of finitely generated groups provides a rich and natural source of examples for this framework, yielding an expansive field of research that tou

ches upon many beautiful areas of mathematics.

Topology in a nutshell 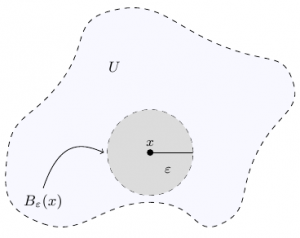 Topology is the study of continuity. It is often described as a branch of geometry where two objects that can be continuously deformed to one another are considered to be the same. While this captures some of the spirit of topology, it also gives the false impression that topology is simply geometry with flexible rubbery material. The reality is much richer than can be described here. We invite the interested reader to see Professor Jerry Vaughan’s ”What is Topology?” page and the links therein.

One goal of topology is to understand continuity in its essential form. Calculus students have a good idea of what it means for a real-valued function to be continuous, but topology seeks to understand exactly what properties of the set of real numbers make the definition of continuity possible. This leads to the definition of an open set, which, for a metric space such as the Euclidean plane, is pictured here. A set with a specified collection of sets deemed to be open is a topological space. Then, by defining continuity in terms of these (abstract) open sets, topologists are able to recover its essential ”deformation-invariant” properties described above. These properties might include whether the space is ”connected,” how many ”holes” it has or its ”dimension.”

From its very beginning in the latter half of the 19th century, topology took on two distinct flavors. Poincaré is recognized as the first person to take a topological approach to analysis in general. During this time mathematicians began to study properties of n-dimensional polyhedra and in 1895 Poincaré defined the homology groups of a complex and the fundamental group. He viewed polyhedra as the basic objects in topology and in studying properties of spaces built up from these polyhedra, he established what became known as combinatorial topology. In the 1930s, Čech built on work of Brouwer and Alexandrov to define homology groups for aribtrary spaces. These techniques were later refined and would eventually become algebraic topology.

Also in the late 19th century, Cantor, who was working on general set theory, established notions such as accumulation points, open sets and closed sets in Euclidean space. Fréchet and (later) Hausdorff would evenutally generalize this work to define a topological space. The study of topological properties of point sets without reference to a polyhedron or Euclidean space became known as general (or set-theoretic) topology. Today topology has blossomed into a rich area of mathematics on its own as well as interacting with several other important branches of mathematics.

Topology is an active research field at UNCG. We have faculty working in set-theoretic topology, geometric topology, and topological algebra, among other specialties. For more information about the research interests of our faculty, see our people page. Graduate students have worked on projects in computational topology and our Lecture Series in Computational Mathematics includes visits by mathematicians working in this new and exciting area of topology.

Topology and its Applications

Topology and its Applications is primarily concerned with publishing original research papers of moderate length. However, a limited number of carefully selected survey or expository papers are also included. The mathematical focus of the journal is that suggested by the title: Research in Topology. It is felt that it is inadvisable to attempt a definitive description of topology as understood for this journal. Certainly the subject includes the algebraic, general, geometric, and set-theoretic facets of topology as well as areas of interactions between topology and other mathematical disciplines, e.g. topological algebra, topological dynamics, functional analysis, category theory. Since the roles of various aspects of topology continue to change, the non-specific delineation of topics serves to reflect the current state of research in topology. Professor Jerry Vaughan serves as an Editor-in-Chief of Topology and its Applications.