A dedication ceremony was held for the Jerry and Theresa Vaughan Conference Room in honor of the outstanding contributions of current professor Jerry Vaughan, and his late wife, Professor Theresa Vaughan. 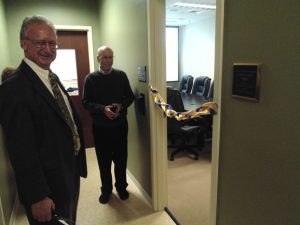 On Wednesday, October 9, 2013 a ceremony was held to dedicate the new conference room in the UNCG Mathematics and Statistics Department to Jerry and Theresa Vaughan for their generosity and outstanding contributions to the department and to the university as a whole. The conference room is officially titled the Jerry & Theresa Vaughan Conference Room, and is located in the Petty Building in Room 149. It features a fully functioning teaching presenter station, a large table with comfortable seating for 10 people, and a dedication plaque in honor of Jerry and Theresa Vaughan. The funding was provided by the College of Arts and Sciences.

Drs. Jerry and Theresa Vaughan have been exceedingly generous to the Department of Mathematics and Statistics. The Dr. Theresa Phillips Vaughan Math Scholarship has already been funded and is providing support for students. Dr. Jerry Vaughan has also provided an additional planned gift that will be added to this scholarship. Additionally, Dr. Jerry Vaughan has completed paperwork to provide an additional planned gift to establish the Jerry E. Vaughan Math Scholarship. Their generosity to the Department of Mathematics and Statistics is held in high regard. 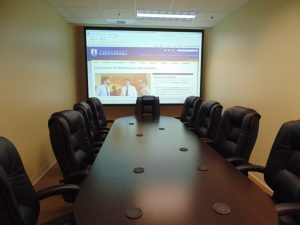 Theresa Elizabeth Phillips Vaughan 1941.2009, was born in Kearney, Nebraska, and grew up in California. She received a B.A. from Antioch College, an M.A. from American University, and a Ph. D. from Duke University, all in mathematics. Professor Theresa Vaughan was a member of the Mathematics Faculty at UNCG for 21 years before retiring in 2008. She was very involved with her students, and served as chair of the Mathematics Scholarship committee. She was vice president of the Board of Directors of the International Fibonacci Association, and a member of several professional organizations. Most of her research was in algebra, finite fields, combinatorics and discrete mathematics. She was the author of many published papers collaborating with many colleagues and students at UNCG and with researchers from other universities. In 1988, Theresa conceived the idea of a one-day regional conference on number theory and combinatorics, and she hosted the first of what grew into an annual two-day conference called SERMON which is an acronym the “Southeastern Regional Meeting on Numbers.”

Jerry Vaughan received a B.S. from Davidson College and a Ph.D. from Duke University. Professor Jerry Vaughan has been a member of the Mathematics Faculty at UNCG for 40 years and continues to teach and do research with passion and dedication. He is very involved with his students and has served as chair of many important departmental committees during his career at UNCG. Professor Vaughan.s research interests include set-theoretic topology, set theory, general topology, mathematical logic, and functional analysis. He is currently co-editor in chief (with Jan van Mill, Vrije Universiteit, Amsterdam) of the international research journal, .Topology and its Applications,. published by Elsevier Science B.V. He also co-edited the book .Handbook of Set-theoretic Topology. with Kenneth Kunen and .The Encyclopedia of General Topology. with K.P. Hart and J. Nagata. Another interesting professional activity that Professor Vaughan partook includes serving as a Russian translator for the American Mathematical Society (1972.1975). In 1974, Dr. Jerry Vaughan began the Carolina Topology Seminar, a research seminar on topics in topology and its applications. His service and generosity in the Department of Mathematics and Statistics at UNCG is much appreciated.