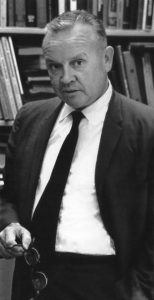 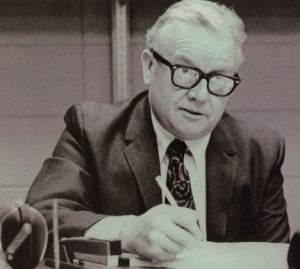 Dr. Posey, known to everyone as Gene, came to UNCG in the fall of 1964, the year the Woman’s College of the University of North Carolina became the University of North Carolina at Greensboro (UNCG). His intent was to help develop a stronger undergraduate and eventually a graduate program. He has always believed that a good mathematics library was essential for any solid mathematics program.

Gene’s first position after receiving his Ph.D. from the University of Tennessee was at West Virginia University (1954 – 1959). In 1959 he took a position at Virginia Polytechnic Institute and State University, usually referred to as Virginia Tech (1959 – 1964). Gene came to UNCG from Virginia Tech in 1964 and became head of the department in the spring of 1965.

Professor Anne L. Lewis, who was the head of the Mathematics Department at the Woman’s College, recruited Gene in 1964. The total Mathematics Department in 1963 consisted of Anne Lewis, the only Ph.D. in the department, and five instructors holding master’s degrees. When Gene arrived at UNCG in the fall of 1964, he became aware that Professor Lewis was now planning to marry and would be moving to Chapel Hill. He became head in the spring semester of 1965 and was the only Ph.D. in the department. When Gene stepped down as head in 1980, the department had sixteen Ph.D.’s and nine instructors with master’s degrees.

Gene set about transforming the small mathematics department of the Woman’s College into a university-level department. He assembled a group of research-oriented mathematicians and started two new master’s programs. These were the Master of Arts in Mathematics and the M.Ed. in Mathematics Education. Gene believed that teachers of mathematics needed a strong background in mathematics. The M.Ed. program he developed was nearly as strong in mathematics as the M.A. because the M.Ed. required only three education courses.

Gene worked hard to establish a collection of research journals and books in the small Woman’s College Library in order to make the library suitable for doing research in mathematics. This went well at first. In particular he ordered all the journals of the American Mathematical Society back to 1940, and on microfilm back to their beginnings. Another notable acquisition was the complete collection of “Fundamenta Mathematicae” all the way back to the first volume in 1920. Posey had strongly held ideas as to the basic journals that were essential to any research-level mathematical collection. At one point, however, the dean declined to authorize a subscription to a journal that Posey felt was essential. Posey did not hesitate. He wrote a check for the subscription price of the journal and sent it to the dean attached to his letter of resignation. He promptly got the check and letter back, along with the subscription to the journal.

Posey’s dissertation was entitled “Almost Polyhedral Cells in Euclidean 3-Space.” Results from it appeared in the article “A characterization of tame curves in three-space” written with his advisor O. G. Harrold, Jr and H. C. Griffith, who was also a student of Harrold’s a year ahead of Posey. The “tame curves” paper was announced in the Proceedings of the National Academy of Sciences and published in the Transactions of the American Mathematical Society 79 (1955), 12–34. 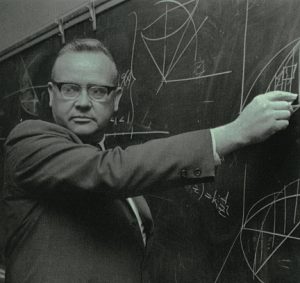 In 1964, Gene published a paper in the Duke Mathematics Journal entitled “Proteus forms of wild and tame arcs.” In this paper he introduced the concept of a “completely wild arc.” He proved that an arc is completely wild if and only if every parameterization h:[0,1] → R3 of the arc in 3-dimensional space has local maxima on an everywhere dense subset of [0,1]. Following such a parameterization by one of the projection maps results in a continuous real valued function of a real variable, which has local maxima on an everywhere dense set. At first Gene conjectured that no such real functions exist, and hence, completely wild arcs did not exist either. However, in a sequence of three papers, Posey and co-authors showed that not only did such continuous real functions exist, but also even stranger ones could be constructed.

About thirty years later, beginning Fall 2008, the department was granted permission to institute a Ph.D. in Computational Mathematics. Posey’s dream of having a Ph.D. in mathematics at UNCG was finally realized.The two master’s degree programs that Posey started at UNCG proved to be popular, and with the encouragement of the UNCG administration, Posey worked to develop plans for a Ph.D. degree in mathematics. These plans were quickly approved on campus and were under consideration by the UNC General Administration. At that point, however, the plans ran up against a consent decree between the federal government and the University of North Carolina to resolve civil rights issues. Essentially the plans for the Ph.D. program (as well as programs at other universities) were discarded because the consent decree froze some proposed programs in the state system. Those difficulties had nothing to do with the merits of Posey’s plan. 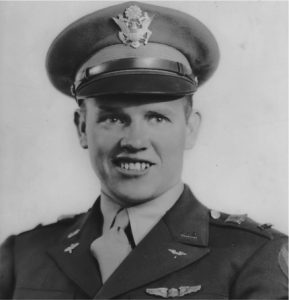 No discussion of Gene Posey would be complete without some mention of his activities during the Second World War. In fact, the war interrupted Posey’s academic career. He was in his second year of college at East Tennessee State College (now University) when he decided that America would not stand idly by while Nazi Germany conquered Great Britain. He knew war was inevitable, and he decided that if he had to go to war he wanted to go as a fighter pilot in the Air Force. In July 1941 he left college and signed up as a Cadet in the Air Force. This was five months before the attack on Pearl Harbor, which propelled America into the war.

Gene spent nearly a year in cadet training and qualified as a fighter pilot in 1942. After he graduated from pilot training Gene was assigned as a test pilot in Philadelphia, and on the way there he stopped in Knoxville, Tennessee to visit his brother. While he was there he met his future wife, Christine Johnson, who was attending the University of Tennessee. They were married on Christmas day in 1943 and eventually had two children, Margaret and Daniel.

Eventually Gene attained the rank of Captain in the Air Force. He flew 50 combat missions during the Africacampaign (also some in Sicily and Italy) and was promoted to squadron leader. His plane was shot down twice in Africa. One of those times his plane was shot down near Carthage after he had destroyed two German Messerschmitt Bf 109’s, the backbone of the Luftwaffe fighter force in World War II. When his plane was hit, it was too low to safely bail out, but he managed to land in the desert. He could hear fighting nearby and was unsure of the direction to the allied lines. Luckily, he was found by a group from the Free French army, but they had difficulty convincing him they were friends-not foes-before he would accept a ride back to his base. 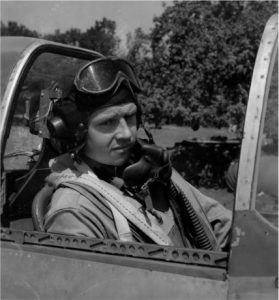 After the Africa campaign, Posey returned to Florida as a fighter pilot instructor. This stateside job did not last very long and he was soon reassigned to the European campaign. Posey flew 68 combat missions over England, France, and Germany. In one incident his plane was running low on fuel. He was strongly motivated to land somewhere other than countries occupied by Germany. Gene nursed his fuel and managed to land in Sweden. The Swedish government remained neutral during he war by making various concessions to Germany, one of which was to confine for the duration of the war any allied personnel that came into Sweden. The Swedes, however, were not allies of Germany: they helped Posey escape to England. Gene soon returned to the war in Europe, but his plane stayed in Sweden.

Towards the end of the war, during the Battle of the Bulge, he was on a reconnaissance mission and was shot down again on December 8, 1944. This time, unfortunately, his plane crashed badly and he shattered the bones in one shin and ankle into dozens of pieces. He was picked up by the Free French army and spent six months in a hospital in England. After that he was transferred to a hospital in Memphis, Tennessee where he went for further recovery for over a year. He was able to spend some of that time as an outpatient with a walking cast. His injured leg never fully recovered and for the remainder of his life his leg and ankle would be swollen at the end of the day. 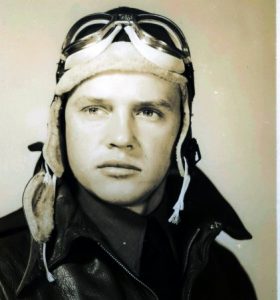 During his time in the war he was awarded an impressive array of medals and citations* including the Distinguished Flying Cross with oak leaf cluster (the Distinguished Flying Cross is a medal awarded to “any officer or enlisted member of the United States armed forces who distinguishes himself or herself in support of operations by heroism or extraordinary achievement while participating in an aerial flight”). Posey was clearly a war hero

Due to his injury Gene was not able to continue as a pilot. He told the Air Force that rather than take a desk job, he preferred to go back to college to become a teacher of mathematics. That is what he did. He returned to East Tennessee State College and completed his bachelor’s degree. He then went to the University of Tennessee in Knoxville for graduate work as previously mentioned.

Posey stepped down as department head in August 1980 to return to teaching. He retired from UNCG in 1988. Before leaving, he and his wife Christine made a generous contribution to the department’s student scholarship fund. The “Eldon E. And Christine J. Posey Mathematics Scholarship” is awarded on the basis of academic achievement to undergraduate students majoring in Mathematics. It is one of the department’s major scholarship funds, and has helped many students through the years.

1944: Flew 68 combat missions in England – France – Germany
1944 (May 13) Interned in Sweden after running low on fuel over Germany.
1944 (June) Group Operations Officer – France
1944 (Dec 18): Shot down and wounded in an air operation over Belgium (Battle of the Bulge). Recovered by French troops. 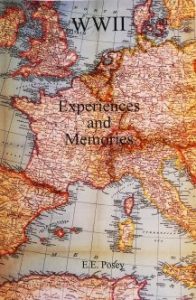 During his retirement, Gene wrote about his experiences in World War II. By the time of his death he had completed a manuscript, but died before seeing it through to publication. His family took the manuscript, added a number of relevant photos, some taken by Posey, and some from war achives, and published the whole as a book “World War II, Experiences and Memories,” by E.E. Posey. It is avaliable for free download as a PDF file from this address:http://www.lulu.com/product/download/wwii—paperback/5550057. It is also avaliable as a paperback book printed on demand (with a color cover, some color maps and photos, on 80 weight paper) fromhttp://www.lulu.com/content/paperback-book/wwii—paperback/7660432.