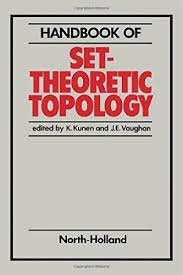 Jerry Vaughan is one of the editors of the Handbook of Set-Theoretic Topology. This Handbook is an introduction to set-theoretic topology for students in the field and for researchers in other areas for whom results in set-theoretic topology may be relevant. The aim of the editors has been to make it as self-contained as possible without repeating material which can easily be found in standard texts. The Handbook contains detailed proofs of core results, and references to the literature for peripheral results where space was insufficient. Included are many open problems of current interest.